„The world failed the Covid test. What next?” 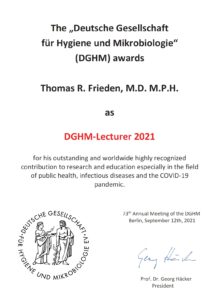 Dr. Tom Frieden is American infectious disease and public health physician who has achieved a lot during the past 25 years of his carrier.

Frieden was born and raised in New York City. He started studying medicine at Columbia University College of Physicians and Surgeons and graduated with an MD degree in 1986. At the same time he attended Columbia University Mailman School of Public Health and obtained an MPH degree in 1986. He completed a residency in internal medicine at Columbia-Presbyterian Medical Center followed by a one-year infectious diseases fellowship from 1989 to 1990 at Yale School of Medicine and Yale–New Haven Hospital.

From 1990 to 1992, Frieden worked as an Epidemic Intelligence Service officer assigned by CDC in New York City.

He began his public health career in New York City in 1992 as assistant commissioner of health and director of the New York City Department of Health and Mental Hygiene, Bureau of Tuberculosis Control, confronting the largest outbreak of multi-drug resistant tuberculosis to occur in the US. During this time he was fostering public awareness and helped to improve city, state and federal public funding for TB control. The New York City epidemic was controlled rapidly, reducing overall incidence by nearly half and cutting multidrug-resistant tuberculosis by 80%.

The city’s program became a model for tuberculosis control nationally and globally.

1996-2002 Frieden worked in India as a medical officer for the World Health Organization, on loan from the Centers for Disease Control and Prevention. He helped the government to scale up a “Revised National Tuberculosis Control Program” for effective tuberculosis diagnosis, treatment, and monitoring. The program’s 2008 status report estimated that the nationwide program resulted in 8 million treatments and 1.4 million lives saved.

During the years 2002 to 2009 he worked as a health commissioner of the New York City Department of Health and Mental Hygiene and led health transformation in New York City, increasing life expectancy by 3 years, preventing more than 100,000 deaths from smoking, and spurring national and global action on, among other areas, better epidemiologic understanding and control of public health problems including HIV, tobacco control, nutrition, as well as the integration of health care and public health.

In 2009 he was appointed by President Barack Obama as the director of the U.S. Centers for Disease Control and Prevention (CDC), and the administrator of the Agency for Toxic Substances and Disease Registry. In a statement, Obama called Frieden „an expert in preparedness and response to health emergencies“ who in seven years as the city health commissioner has „been at the forefront of the fight against heart disease, cancer and obesity, infectious diseases such as tuberculosis and AIDS, and in the establishment of electronic health records.“

As Director, he led the Centers for Disease Control and Prevention (CDC) work that ended the Ebola epidemic, launched initiative that will prevent 500,000 heart attacks and strokes, sounded the alarm and accelerated progress addressing the epidemic of opioid use.

He resigned 2017 from the CDC and became President and CEO of the global non-profit initiative Resolve to Save Lives, a $225 million, five-year initiative that helps governments and civil society to prevent epidemics and cardiovascular disease.

In 2020, as CEO of Resolve to Save Lives, he has been fully engaged in advancing an effective global response to the COVID-19 pandemic, including reviewing how to identify and interrupt superspreading events.

He was awarded numerous honors and awards as honorary doctorates by several universities (e.g. New York University, Albert Einstein College of Medicine) and the Julius B. Richmond Award, the highest honor given by Harvard School of Public Health (HSPH).